Products featured are independently selected by our editorial team and we may earn a commission from purchases made from our links; the retailer may also receive certain auditable data for accounting purposes.

One of the most anticipated sporting events of the summer is finally upon us, as UFC returns stateside for an all-out brawl. UFC 252 airs live from Las Vegas tonight, Saturday, August 15, with Stipe Miocic facing off against Daniel “DC” Cormier for the heavyweight title.

Prelims for UFC 252 start tonight at 5pm PST with the main card starting at 10pm PST. You can watch UFC 252 live on ESPN+, which lets you stream the fight on your phone, tablet, laptop or on TV.

The main fight pits two-time UFC heavyweight champion Miocic versus former UFC heavyweight and light heavyweight champ, Cormier. The two have met twice before, with each man claiming a victory apiece, making this a true trilogy fight for the title. The stakes are also higher as Cormier has announced that this will be his last fight before retiring — win, lose or draw. 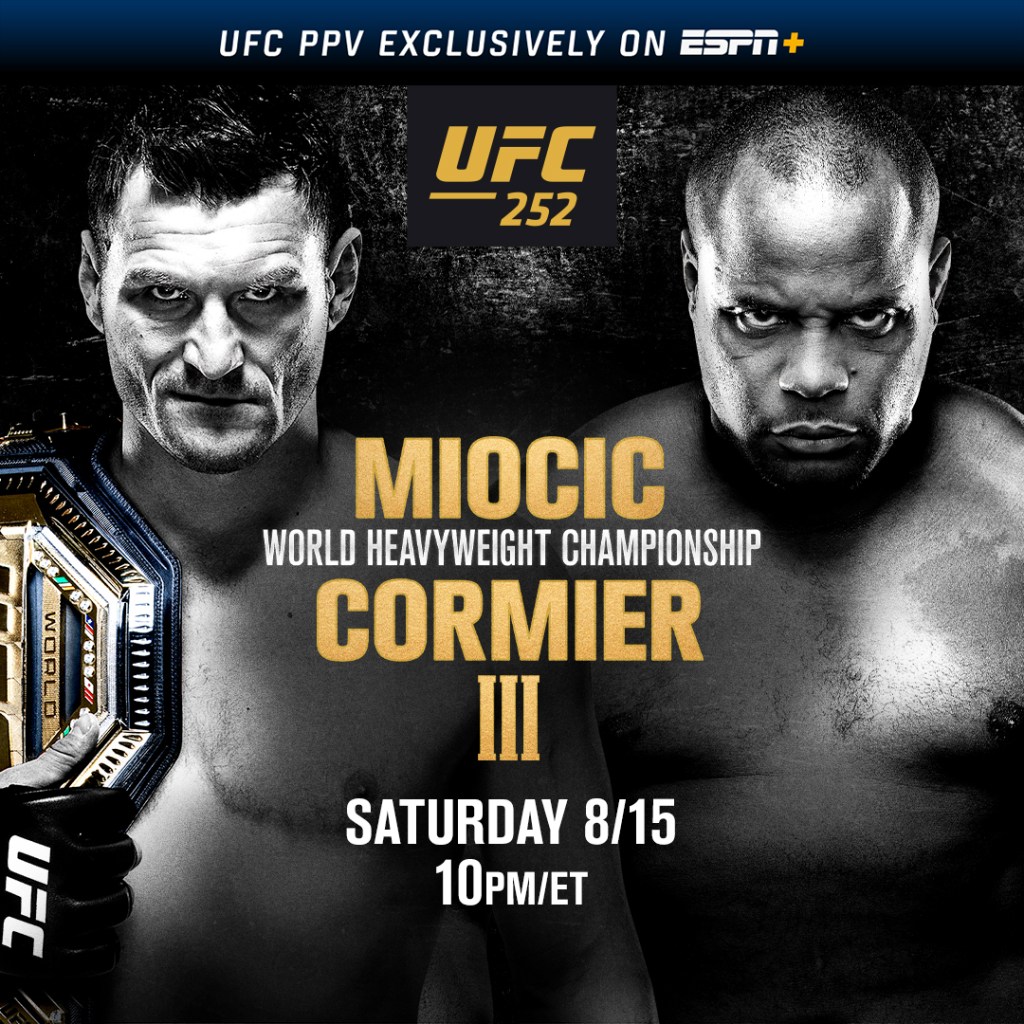 UFC 252 is streaming live on ESPN+, which is a subscription-only service that costs $4.99/month. Subscribers will be able to watch the prelims for free. The main card is a pay-per-view event available exclusively on ESPN+. To watch UFC 252, you’ll need to first sign up for an ESPN+ subscription before paying the $64.99 PPV fee.

Your best deal is to snag ESPN’s current bundle promo, which gets you a year-long ESPN+ membership plus instant access to UFC 252 for just $84.98. The deal saves you more than 25% off buying the annual membership and fight separately.

ESPN+ says existing subscribers who upgrade their current plan to an ESPN+ Annual Plan and purchase UFC 252 will be eligible for the 25% savings as well.

If you just want to access the fight, you can sign up for a single month of ESPN+ service here, and then add the fight to your watchlist. The total price will be $70.

In addition to Miocic versus Cormier, the other heavyweight (non-title) bout pits former champ, Junior “Cigano” Dos Santos against Jarzinho Rozenstruik. The bantamweight bout is another key fight to watch, with Sean O’Malley squaring off against Marlon Vera. One of UFC’s rising stars, O’Malley is coming off a knockout win over Eddie Wineland at UFC 250.

Eight other fights are on the fightcard for UFC 252 including two women’s fights: Ashley Yoder faces off against Livinha Souza and 15th-ranked Felice Herrig takes on Virna Jandiroba in two exciting strawweight matchups.