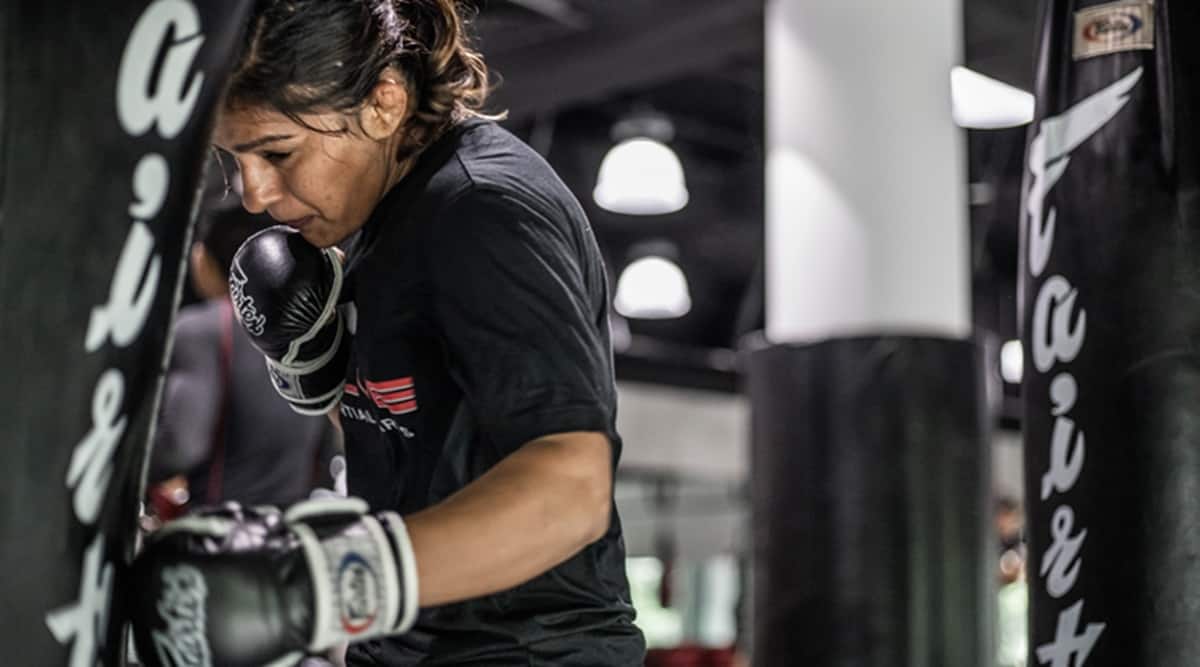 Ritu saw a rare emotional side of father Mahavir Phogat during these five months.

Everyone she knows has seen the movie… Her instructors, training partners and fans/MMA practitioners who make the ‘pilgrimage’ to her gym in Singapore. Everyone also assumes to know her father — “We saw him in the film. His sacrifices, his behaviour” — but Ritu Phogat isn’t tired of talking ‘Dangal’. She just wants you to know that there’s more to her ‘Haanikaarak Bapu’.

“You have seen it in the movie, he is very strict,” says Ritu, third of the four daughters of Mahavir Phogat, immortalised by Aamir Khan in the 2016 blockbuster.

“But there’s a sentimental side to him and I have been seeing it during this pandemic. Earlier he called once a week or two. That changed to him calling me every day. ‘Kaisi hai? Mann lag raha hai ki nahi (How are you? Are you focusing properly)?’ Ma told me he got emotional a couple of times as well. ‘We’re all together here. She is alone in a different country. Don’t know how she must be living’…”

Her voice quivering, Ritu pauses before continuing softly: “On the phone, I would always tell him, ‘everything is great here. Time ka pata nahi chalta (we can’t keep a watch on time)’. I never let him know that I am missing home badly.”

In February, Ritu took her MMA (Mixed Martial Arts) record to 2-0 in the backdrop of the looming Covid spectre. She managed one brief sojourn back home for Holi before borders closed. The following five months have been her longest uninterrupted stretch in Singapore since signing the contract with ONE Championship in 2019.

“Ye ghar mujhe khaane ko aata tha (I was being haunted by loneliness),” Ritu says. “I’ve never been away from home this long. If coronavirus hadn’t happened, I would have been home at least twice in this time. Then there was no training (as the Evolve gym was locked down). When you’re training, learning new skills, you don’t worry about time passing. But I am living alone, in a foreign country, and can’t do the thing that keeps me occupied and happy. Those days were extremely difficult.”

Kitchen was the haven, as Ritu recreated home on her plate. “Gulab Jamun, dahi vade, golgappe. I learned making all the food that I was missing,” she says. “I hadn’t watched a movie for a long time, so I logged onto Netflix.”

The binging though never strayed far from her sport. Ritu finished documentaries and films — “I loved the ‘Never Back Down’ movies — based on MMA”. Adapting to the train-from-home life, however, was tough for the fledgeling prospect.

“It’s a new sport for me. The online training was good, but I couldn’t be sure whether what I’m doing was right or wrong,” says Ritu. “I made a schedule. Wake up at 8 am, train twice a day. I would do the striking drills, basic exercise and I would send videos to the coaches, and they would encourage me. But it was difficult at this stage for me.”

The Evolve gym reopened in mid-June amid social distancing and regular testing. Ritu is happy to be training, though there are still restrictions. For one, the wrestler can’t wrestle for the time being.

“Wrestling, grappling. Ground game like Brazilian jiu-jitsu is not allowed due to safety concerns. I am working on my striking, boxing and Muay Thai. Any live, contract-sparring is also not allowed but pad work with coaches is helping me sharpen my striking.”

Siyar Bahadurzada, Ritu’s coach at Evolve, says his fighter’s technique has improved during the lockdown.

“Ritu has improved a lot since her last fight especially in striking. She’s getting a feel for it. Her technique looks better, her footwork has improved as well as her ground and pound,” Bahadurzada explains. “Covid has affected her training in the wrestling and grappling aspect, but she is using this time to add new tools in the striking department. Ritu is a warrior and has many plus points. Her wrestling, work ethic, and one that exceeds them all is her mental toughness.”

In an alternate universe, Ritu has already fought twice more and is barrelling towards a world championship shot. The pandemic has delayed that timeline, but Ritu remains fundamental to ONE Championship’s India expansion. She is also a guest star in the promotion’s spin-off of the Apprentice TV show, along with ONE world champions Angela Lee, Xiong Jing Nan and former UFC flyweight champion Demetrius Johnson.

“The goal hasn’t changed. I’ll be back in the ring as soon as the Singapore border reopens, and athletes from other nations are allowed. Till then I’m happy sweating in the gym for hours.”

Resumption of the grind means that conversations with Mahavir will be back to the weekly schedule. But Ritu knows her father is happier with that arrangement.

“He knows now that I am back on track, with focus on my goals. It’s back to papa asking me how my training is going, what new things have I learned,” she says.

There is, however, someone that Ritu misses more than even her father — sister Geeta’s nine-month-old son.

For all the latest Sports News, download Indian Express App.